What is the Difference Between a Freight Bill and Bill of Lading? Author: Gary McKenzie
July 16, 2020

In the parcel world, the terms freight invoices and bills of lading are used frequently. But what is the difference?

Just like any other invoice, freight invoices are when a company tells you that you owe them money, and how much you owe. It gets confusing because these are often referred to as bills.

In the freight world, the bill of lading is a very specific document. That one piece of paper, or an electronic version of it, is the carriage contract between the shipper and the carrier for that particular shipment.

Every bill of lading is a contract and sets forth the terms and conditions relative to the movement of goods from one place to another.

If the shipper's paying for it, bills of lading specify the following:

All the details about that carriage or that movement of goods are on a bill of lading. It’s signed at the beginning when the carrier picks it up. They sign it when it's received on the other end too. In other words, bills of lading are contracts in and of themselves for the movement of that particular freight.

The equivalent for the parcel industry would be a contract associated with every parcel shipment that went out, which isn’t the case. The parcel industry is controlled and operated for the most part by just a few players, like UPS and FedEx, and they are aggregators.

They go around and they gather a bunch of smaller items and then they move them within their network to wherever they’re going. The freight industry has been highly regulated since the days of wheeled carts, but those regulations apply to shipments of goods across oceans and internationally. There are lots of regulations that go into the movement of freight, especially internationally, and it is true in the parcel industry as well.

The freight industry, however, is moving large quantities of certain commodities at scale. There's lots of rules regarding specific commodities that you can't ship, like trees from the Amazon or products made from those trees. Because of tariffs and prohibitions on certain goods, you need documentation for the specific item that's being transported.

Documentation ensures more than that, like the correct charges and tracking information, but it’s largely about adhering to international law. It's the same document that controls air freight, bulk freight, what's in containers, truckloads, less-than-load (LTL) — any big, bulky freight.

Why Are Accurate Bills of Lading Important?

Now that we’ve established what bills of lading are, let’s talk about why accuracy is so important.

In a bill of lading, very specific commodities are defined and that document is the contract. If it's inaccurate, any inaccuracies become a part of that contract.

Let’s say a shipper was moving gold chains across the US, for example, and the sender put styrofoam cups on the bill of lading. If the shipper loses that shipment, their claim will have to be for styrofoam cups.

Accuracy from both the shipper and the carrier is important — that's why there are signatures required. That becomes a primary document, and if there is a dispute, that document will define the claim.

Bills of lading also define service level agreements between freight providers or carriers and their clients.

Since each move is its own contract of carriage, whatever is on a given bill of lading is the agreement. Even with an existing pricing agreement between a shipper and a carrier, this bill of lading will define this particular movement.

If you ask for expedited service, for example, that’s an additional cost that needs to be reflected on the bill of lading. If it isn’t you aren’t necessarily entitled to it even if you’ve paid for it. Once you’ve signed to an agreed-upon price, if certain terms aren’t in the contract, the carrier doesn't have to adhere to it.

No Bill of Lading

If there is no bill of lading or you forget to include it, the carrier shouldn’t collect the freight. In fact, if the carrier picks up your freight without a bill of lading, you need to discontinue using that carrier.

What Do Freight Invoices Include That Bills of Lading Do Not?

That’s why auditing the bills of lading against the invoices you receive is a very important part of your logistics process. The invoice should reflect the contract of carriage, but the bill of lading doesn't typically have the cost.

Shippers can take steps to prevent disputes when they prepare bills of lading. One crucial element for shippers is ensuring that they have the right commodity codes for what they're shipping.

In freight, every commodity has an NMFC code that defines exactly what it is relative to transportation or freight. Having the codes for what you're shipping ensures that what you're being charged is accurate.

Every item has an NMFC code. If you look up the NMFC code for the cup on your desk, that code will be the same everywhere. NMFC codes make it absolutely clear what you’re getting invoiced for on the back-office operations side.

If you don't have an NMFC code, they'll try to assign one. There’s a lot of variation, so they might charge you for a bigger or heavier item than you shipped. They may also just kind of look at it and say, "Here's the size, here's the weight, here's the density, and we'll charge you accordingly.”

That is probably one of the best things that you can do. Make sure that you are coding the commodity that you're shipping accurately and consistently every time on the bill of lading.

Other things that you can do is check processes and signatures by the carriers before items ship. Often, before they pick items up and leave your dock, they deliver the bills of lading but neglect to sign them. Confirming signatures can prevent a dispute case.

A quality assurance check should ensure that:

That check makes sure the information on the bills of lading is accurate before the carrier leaves your dock. In short, that's probably the most important thing you can do.

There is an auditing process that fits into all of this as well. At the other end of the process, you get an invoice from the carrier. That carrier invoice should reflect all of the information that is on the bill of lading. And you should not be charged more than what the bill of lading suggests was being shipped. 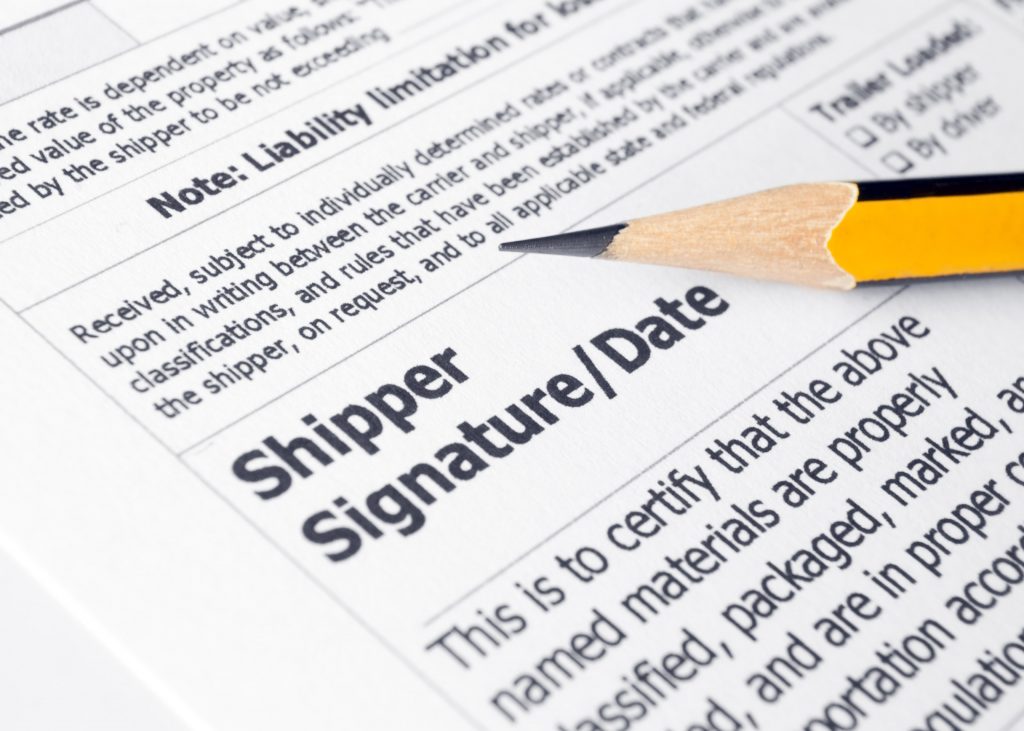 If you ship two pallets, for example, you should get a bill for two pallets. If the NMFC for the cup was used, you should be billed according to the dimensions of boxes of cups.

The auditing process will make sure that the bills of lading and the invoices match so that you're paying the right amount to your carriers.

For more information on how you can join the thousands of shippers nationwide using Lojistic to send costs packing, please contact us today.